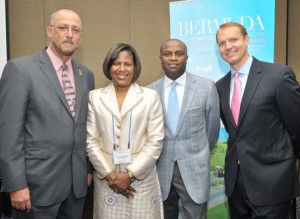 W. Dave Dowrich, VP of Investment at Goldman Sachs, 2nd from r., with Chairman of the CTO, Ricky Skerritt, l; Minister Minors of Bermuda, 2.d from l., and Brian Lilly, r., CEO of Lilly Broadcasting and owner of WSEE TV and One Caribbean Weather, premier sponsors of the event. (Sharon Bennett image)

CaribPR Wire, NEW YORK, NY, Fri. June 10, 2011: The Caribbean is being urged to compete for the global “wallet share” and step up the promotion of “its investment story.”

Dowrich, addressing a packed room at the New York Marriot Marquis Hotel in Times Square, insisted that the Caribbean’s investment “product” stacks up against most other regions of the world, including the BRICS (Brazil, Russia, India and China) on several fronts, such as political stability, accessibility and ease of doing business.

But “where we fall down is in selling and telling our investment story, i.e. the ‘Promotion – P’ of the principles of marketing,” he said of the CARICOM region, whose combined Gross Domestic Product is put at US$90 billion.

Comparing the Caribbean to private companies going public and the need to ensure that their story continues being told to their existing and future investor base, Dowrich said the Caribbean and its leaders must see investment in a similar vein.

“We therefore need to be sure that at every opportunity, our story is told on a consistent basis and told by credible and trust worthy folks such as our senior ministers, and then reinforced by our teams on the ground, who can ‘talk the talk’ of those that need to hear it,” he said.

Dowrich was one of four speakers who addressed the event yesterday. Others included Minister of Business Development & Tourism of Bermuda, Patrice Kimberly Minors; Martin Mohabeer, the Guyana-born Managing Director of Spackman Group and CEO of Spackman Capital and David Brillembourg, CEO of the Brilla Group.

Minors for her part insisted that Bermuda remains open to doing business while Brillembourg advised that attention be turned to Latin American pension funds as potential investors in the Caribbean region.

“With this fund we hope to change that,” said Mohabeer, while adding that the fund will make investments in small to middle enterprise firms specializing in IT, media and technology and construction among other sectors.

“This event surpassed our expectation,” said Felicia Persaud, CEO of Hard Beat Communications, which conceptualized and co-presented the event with the CTO. “We look forward to making this an annual part of Caribbean Week in New York.”

“The Caribbean Tourism Organization was proud to team up with Hard Beat to present this event, since in these tough economic times, investment in the Caribbean is critical and the CTO believes strongly in continuing to boost the tourism sector of this vibrant region by presenting investment opportunities for its members,” commented Brown-Bramble.

The Bermuda Department of Tourism and the Pennsylvania-based WSEE TV and OneCaribbeanWeather.com, both part of Lilly Broadcasting Corporation, were the official sponsors of the ‘Invest Caribbean Power Breakfast.’

Hard Beat Communications brands itself as a Digital Media Solutions Company. The company does this through its Digital Content Creation and Dissemination and syndicated digital newswire – New Americas Now, formerly CaribWorldNews, its CaribPR wire release dissemination section, part of the PR Newswire; its Media Buying and Event Promotions arm and its New Media Solutions department.

The Caribbean Tourism Organization exists to increase significantly the inclusion of the Caribbean region in the set of destinations being considered by travelers. The CTO, with headquarters in Barbados, comprises 32 member countries, including English, French, Spanish and Dutch countries and territories, as well as private sector allied members. Every year, the CTO presents “Caribbean Week In New York,” which Caribbean Week in New York is a celebration of the sights, sounds, colors, culture and unique vacation attributes of the Caribbean.