LONDON and GUADALAJARA, Mexico, Feb. 17, 2021 /PRNewswire-HISPANIC PR WIRE/ – With ambitions to create the ‘best airport in Mexico’ at its home base in Guadalajara, Grupo Aeroportuario del Pacifico (GAP) plans to invest 10 billion Pesos (US$504m* see note) before 2026 in the development of Guadalajara Miguel Hidalgo y Costilla International Airport.  The plan includes an additional runway and new terminal building as well as, in the short/mid-term, a radical new 6 billion Pesos (US$302m* see note) redesign of the commercial space in the existing building.  The Design Solution has been appointed to deliver the redesign with the new space due to open on a phased basis over the next 2 years before being fully open in 2023. 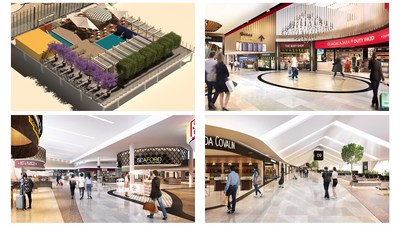 The current terminal has benefited from numerous expansion projects since its opening in 1966 and today is a collection of airside zones, complex circulation patterns and architectural styles.  The objective of the terminal redesign is to rationalise passenger flows, creating a series of engaging touchpoints along the passenger journey, from security to gate, with a visionary design that unifies the entire experience.  The Design Solution has worked alongside the project’s commercial consultants, Pragma Consulting, in fulfilling the approved proposal.

The new plan optimises previously under-utilized space, creating a new vibrancy to the passenger experience with a significantly enlarged commercial zone.   The two security areas are retained and passengers are now drawn towards the airside heart of the terminal, a newly revitalised area overlooking the apron, surrounded by a dynamic mix of retail, bars, restaurants, pop-up sites and other customer service facilities.

“Our first task was to rationalise the passenger flows through the terminal to create an intuitive route in the airside commercial area.  With this approach, passengers have much more direct engagement with the greater exposure given to stores, restaurants, bars, pop-ups and seasonal event experiences” explains Graeme Johns, Director of the Design Solution. “It is always a challenge to transform older terminals that have evolved through piecemeal development, especially those that were predominantly assembled before commercial revenues became so important.  These new designs will create a world class facility and passenger experience fitting for GAP’s ambitions to transform Guadalajara International Airport and to maximise its commercial potential.”

“Mexico is so rich in history, culture, craft and unique landscapes and so finding a special feature to tie the designs together was not difficult.  Guadalajara is the heart of the Tequila and we were inspired by the shape of the harvested Agave plant used in the production of this iconic spirt, which is also one of the fastest growing categories in travel retail.  Its unique form is evident throughout the decoration of the terminal, such as the decorative lighting grilles featured in the main walkways and in the food & beverage area.”

Raul Revuelta, Chief Executive Officer, Grupo Aeroportuario del Pacifico adds. “We first worked with The Design Solution at Sangster Montego Bay Airport in Jamaica, one of our other operated airports.  Shortly after, we appointed them to work at Los Cabos airport in Mexico and now on to Guadalajara.  We have worked together as a team over many months to create something we believe will transform the terminal, both in terms of bringing passengers the best travel experience as well as growing our commercial offer. In the core airside commercial area, we currently have 5,700 sq m and that will increase to 7,250 sq m.  The pandemic inevitably means the implementation of our ambitious plans will likely take longer than originally hoped but we look forward to a phased approach to achieving this vision.”

A key area of the redesign is centred on a flat roof canopy, located outside the centre of the terminal building, over an expanded baggage area.  The proposal is to transform this into a signature feature of the terminal, with an external garden terrace, surrounding an Agave-inspired architectural shade pod, offering casual seating, planting and a unique eating and drinking destination.  The ambience of this garden has also inspired the character of the indoor food & beverage zone and is further reflected in the outside feel that is brought inside to the gate seating areas. Heavily planted areas include trees to complement the minimalistic concrete benches with low level under-lighting, combining to create a light, contemporary and natural landscape look and feel. The exterior aesthetic is further enhanced with the application of resin-bound aggregate floor finishes and warm natural materials.

A large rotunda space is introduced directly after the wall-through duty free store, enabling passengers to pause, orientate themselves, check flight information and then plan how to spend their time before heading to the gate.  A large aura formation of pendant lights, made from Peltra, a Mexican porcelain enamel, designed by local contemporary design agency Bandido Studio in Puebla, is suspended within the space, creating a striking statement with a strongly local sense of place.

Beside agave cultivation, Tequila and Mezcal production, Guadalajara is home to Mexico’s thriving software industry, known worldwide as Mexico’s Silicon Valley.  The airport is the country’s third largest airport, handling almost 15m passengers in 2019.  The new development will increase capacity to 30m passengers per year, an increase of 60% more flights.  Pre-pandemic passenger growth was double-digit and the airport anticipates a return to growth in due course. ENDS

About The Design Solution

The Design Solution is a London based retail architecture and design practice with a strong specialism in the $70bn+ travel retail industry.  The practice has over 30 years’ experience in developing world-class retail solutions for airports, rail, motorways and other retail destinations all over the world together with compelling merchandising and experiential designs for brands.

Grupo Aeroportuario del Pacífico, S.A.B. of C.V. (GAP) is a Mexican company that develops its activity in the airport sector. GAP operates 12 international airports in Mexico and two in Jamaica, serving more than 330 destinations, through 35 airlines. Its shares are listed on the stock exchanges of Mexico and New York.

The airports managed by Grupo Aeroportuario del Pacífico are located at:

The airports managed by GAP in Mexico are owned by the Mexican government and have been allocated in a 50-year concession starting in 1998, as part of a domestic initiative to privatize and improve the quality and security of the country’s airport services.

In Jamaica, the government owns the Montego Bay Airport and the concession granted for its operation is for a 30-year period, which will conclude on April 2033. The Kingston Airport was granted for a 25-year concession. GAP took control of the operation and administration this past October 2019.

Grupo Aeroportuario del Pacífico believes in the value of each individual and seeks to trigger his or her potential through education. Better-educated Mexicans will raise their quality of life and contribute towards the country’s development. GAP, in line with its business model and through its Foundation, is committed to be a factor of change. We work on two strategic pillars: work with the community, through the GAP Schools, and on training the airport community, with Community Training Centers.