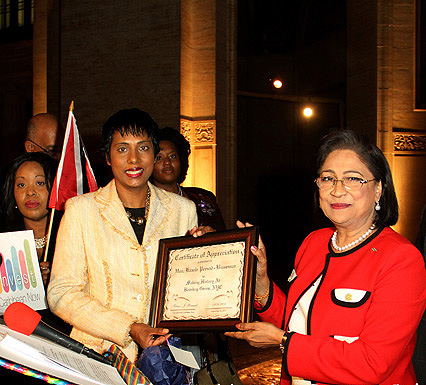 The event was held in conjunction with the Bowling Green Association and the New York City Department of Parks and Recreation at the Bowling Green Park at the southern tip of Broadway, a mecca for visitors from around the world and home to the world famous  3 1/2 ton bronze “Charging Bull.” The flag was raised at 1:45 p.m. on the towering 55 ft. flag pole by Prime Minister Persad-Bissessar and was followed by a private reception at Cipriani’s at 25 Broadway in Lower Manhattan.

ICN Founder and Chairman, Felicia Persaud, presented the prime minister with a Certificate of Appreciation at the ceremony for “making history at Bowling Green” while ICN President, Sheila Newtown-Moses, said she looked forward to further collaboration and partnership between Invest Caribbean Now and the government of Trinidad and Tobago.

“This event showed what the Caribbean Diaspora is capable of achieving through diverse and global collaboration, but most importantly what can be achieved through partnerships between governments and private sector entities like Hard Beat Communications’ Invest Caribbean Now,” commented Persaud on the event. “We were happy to be able to afford the Prime Minister the opportunity to mark the Republic anniversary of sweet T&T even here in NYC.”

Today, September 25th, PM Persad-Bissessar will address the Trinidad & Tobago Investment conference on Thursday at the headquarters of the Council on Foreign Relations, 58 E 68th St