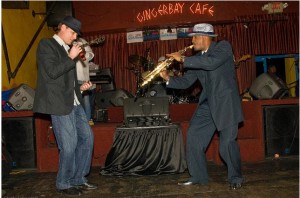 Saxx and his group were last night declared the unanimous winner of the Jamaica Jazz and Blues Festival amateur music contest before a packed house at the Ginger Bay Cafe in downtown Hollywood Florida.

Jon Saxx and the Irresistible Journey beat out five other bands to win the annual talent search competition and the chance to be flown to Jamaica later this month to perform in the birth place of reggae legend Bob Marley.

Judges Willie Stewart, an original drummer of the famed group, Third World;  Joy Schaaffe, of Air Jamaica; Karlene Shakes of the Jamaica Tourist Board;Noel Jones of Ginger Bay Café and Lukee Chung of Frame by Frame and Island Stylee.com agreed with the audience that Saxx and his band performed phenomenally.

Jon Saxx and the Irresistible Journey will perform at the Caribbean’s best music festival, the 2010 Jamaica Jazz and Blues Festival in Trelawny, Jamaica between January 24 and 30, 2010.

Saxx was born in Cincinnati, Ohio, attended college at Miami University in Oxford, Ohio and graduated with a degree in Manufacturing Engineering.

He has been voted Best Local Jazz Artist in South Florida by Miami New Times in 2008 and has performed with Najee, Montell Jordan, Howard Hewitt and at the Monthly National Anthem Performances for the Miami Heat.

Jamaica Jazz Fest Quest is part of the Art of Music segment pushed by Turnkey Productions, the producers of the annual Jamaica Jazz Festival, as a way to help spotlight up and coming musical talent and assist possibly in getting them their big break in the music industry.

The annual Jamaica Jazz & Blues Festival will be held from January 24-30, 2010 in Jamaica.

Jamaica Jazz since its introduction in 1996 was known as the Air Jamaica Jazz and Blues Festival, has attracted thousands of patrons from the USA, Europe, the Caribbean and Jamaica.

This year the festival is again being presented by key title sponsor, the Jamaica Tourist Board. Other sponsors include Air Jamaica, Iberostar, Rose Hall Resort, CVM TV, Link Up Group, Jamrock Magazine and The Gleaner Company among others.

Tickets and packages are available at www.jamaicajazzandblues.com.