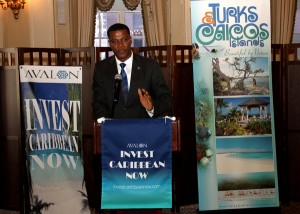 Two premiers, a chief minister, a governor; seven ministers of governments and two commissioners will join more than a hundred delegates, including from China; the U.S. government and the private sector for the Avalon Invest Caribbean Now Forum at the Radisson Hotel in mid-town, Manhattan.

In brief remarks, Premier of the Turks & Caicos Islands, Dr. Rufus Ewing, insisted his country is open for business.

Anthony Eterno of the Caribbean Affairs Office of the US State Department, who will speak on the US’ view on investing in the Caribbean and Xiaoguang Liu, Consul in charge of economic & commercial affairs at the Consulate General of China in New York, will also speak on Wednesday morning on the China-Caribbean opportunities that exist as part of a panel on China and the Caribbean.

The sold out Forum will begin at 8:30 a.m. sharp with a welcome by emcee Kara Coleman, news anchor of One Caribbean Television and opening remarks from founder of ICN and CMO of Hard Beat Communications, Felicia Persaud.

This will be followed by remarks from CTO Chair Nicholson-Doty and a speech by Eterno; Premier Dr. Ewing and his finance minister, Washington Misick.

Two panels will then follow – one on Development, Tourism & Beyond with Heather Flossiac of Belle Vue Properties of St. Lucia; E. Jay Saunders, CEO of Digicel TCI; Brian Lilly, founder of One Caribbean Television and Ganesh Ramanathan, creative director at Hard Beat Communications and the other on China and the Caribbean that will feature Liu; Johnny Liu of the American Chinese Commerce Development Association and Li Li, managing director of the Chinese American Business Development Center.

The panels will be moderated respectively, by Dr. Grace Lappin, managing director of Avalon Partners and Arthur Piccolo of the New Sports Group, who is replacing Martin Mohabeer of Spackman Capital.

The formal forum will wrap up at 10:30 a.m. with a presentation by Miguel Reyna – Director, Port Business Development and Asset Management, Royal Caribbean Cruises, Ltd and the ICN corporate leadership award presentation to Royal Caribbean International. An hour long doing business and networking session will bring the curtains down on ICN 2013.

The Avalon Invest Caribbean Now Forum comes on the heels of U.S. Vice President Joe Biden’s Caribbean trip on May 28th for the signing of the United States – Caribbean Community (CARICOM) Trade and Investment Framework Agreement, (TIFA) and the first visit to Trinidad & Tobago by the Chinese President Xi Jinping, which will take place from May 31 to June 2.