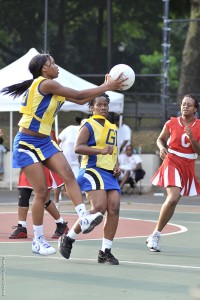 CaribPR Wire, BROOKLYN, NY, Tuesday, July 20, 2010: Pitons1 picked up a pair of wins on the weekend to move into joint first place with Upsetters1 atop the senior division, as the LIME sponsored Caribbean American Netball Association (CANA) summer league continued at the Lincoln Terrace Park, Brooklyn.

With contenders Upsetters1 enjoying the weekend off, challengers Pitons1 made up considerable ground against Flying Target, scoring a close 43-37 win on Saturday evening. Meeting again in Sunday’s night-cap, Pitons1 kept their opponents grounded for most of the match, to come away with a 45-31 win margin.

One level down, Upsetters2 assumed sole leadership of the division (A2) with 31 points from 6 wins and a loss (6-1), beating Untouchables1, 40-33 on Sunday. Pitons2 defeated Volcanies3, 43-22 on the same schedule for second place on 25 points. They are unbeaten in five matches (5-0) since the season opened on June 5. Crusaders2 which defeated Antillians 39-31 on Saturday, are in the third spot with 21 points four points ahead of Volcanoes3, Senators1 and Typhoon1.

Facing what would have been their first defeat of the season, Senators2 held on for a nervous, high spirited, two points win (34-32) against Islanders2, to remain in the top spot in the Intermediate division on 20 points.

In one other match in the Intermediate division, Typhoon2 using a full court press and steady shooting , handed Pitons3 their first loss of the season, 32-29. Romula Abbott (GS) and Trisha Evans (GD), kept Pitons3 in the game but the difference maker was Kursel Lewis, playing at center for Typhoon2, third in the division on 12 points, Pitons3 picked up a point from the loss and are in the second spot on 16 points.

In the Juniors, Sharecroppers maintained their perfect record (3-0), and top ranking, getting by Islanders3 18-15 in a squeaker. Sunsplash3 registered their first win of the season with a 15-8 margin over Senators3. Tied a 4-4 at the halftime break, GS Shivanna Brown  gave her team breathing room with her shoot touch from under the basket. Center Akalia Tomlinson had a good game for Senators3, still searching for their first win.

Another 18 matches will be played this coming weekend (July 24, 25), with the first match on both days tipping off at 4 p.m.

LIME, (formerly Cable & Wireless), is the Caribbean’s leading telecommunications company. LIME has kept the people of the Caribbean connected for more than 100 years. LIME is focused on providing products and services that improve the lives of Caribbean people every day whether they live in the region or are part of the Diaspora.

LIME’s aim is to deliver the best communication services at the best value across the board–full stop. LIME–for living every day.

HOLDING COURT:  A Pitons3 player (left, airborne) won the ball as a teammate (center) watches, but Typhoon (right), won the battle of the two Intermediate division rivals during Saturday’s (July 17) match in the LIME/CANA summer tournament in Brooklyn. Typhoon won 32/29 over Pitons3.