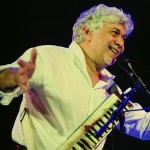 CaribPR, NEW YORK, NY, Weds. May 1, 2013: Birdland Jazz Club will be springing to life this May, as Grammy-nominated artist Monty Alexander and his Grammy-nominated band, The Harlem Kingston Express, returns with their foot-tapping, hip swinging Caribbean infused jazz.

The Jamaican-born, Caribbean-raised jazz great, who recently released his new album and entered his 51st year as a musician, will play New York’s premier live music venue, Birdland, at 315 West 44th Street in New York City, from May 7th to 11th at 8:30 and 11 p.m. nightly.

The performance comes as Alexander’s new album release “Uplift 2” on the JLP label, sits at #4 on the Jazz charts. Tickets for Birdland are $30-40 and can be obtained by logging on here or to http://www.birdlandjazz.com/event/243141-monty-alexander-harlem-new-york/

“I look forward to having another opportunity to play with my ensemble, Harlem-Kingston Express, in one of the finest music venues in the world – Birdland – for my long time faithful friends, as well as new friends who may visit with us,” said Alexander. “I and my colleagues will be celebrating our One Love experience as well as the Joy of Life.”

The musician, whose 50th anniversary album, “Harlem-Kingston Express: Live!” was nominated for a Reggae Grammy and won rave reviews from The Wall Street Journal, The London Evening Standard and Jazz Times among dozens of other media houses, is fresh from performances  at the Bern Jazz Festival in Switzerland and Boston’s legendary Scullers Jazz Club.

Jamaica’s Commander of Distinction and ‘Luminary Award’ 2012 recipient, will next head to the nature isle of Dominica for the first time, where he will headline the increasingly popular, Dominica Jazz ‘n Creole Festival on May 19th at the Cabrits National Park.

Following his Dominica debut, Alexander, will again join his Harlem Kingston Express to bring his brand of jiving jazz, to Washington, D.C.’s popular Blues Alley from June 20th to 23rd and Pittsburgh, PA on June 28th at the South Park Band Shell.

He and his band will wrap up the first half of 2013 in Rochester, NY with a scintillating performance at the Rochester International Jazz Festival on June 29th. For more see http://www.rochesterjazz.com/artist_lineup/?artist_id=934.

In fact, it was Sinatra and his best friend Jilly Rizzo who hired Alexander after he moved to the United States in 1961 at the age of 17.  And it was at Jilly’s famed New York City nightclub that this Jamaican teen caught the ears of Miles Davis, Dizzy Gillespie, and Milt “Bags” Jackson.

Bags introduced him to the great bassist Ray Brown, and the rest as they say, is history, including Alexander’s 1976 Montreux (Switzerland) Jazz Festival performance with drummer Jeff Hamilton and bassist John Clayton, which has become one of the most celebrated live recordings in contemporary jazz.

For more on the Caribbean’s greatest jazz pianist and his music visit www.montyalexander.com.