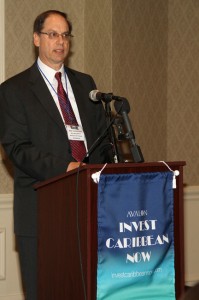 That’s the consensus of 30-year investment veteran, Alan Loewenstein, managing partner of Wedgewood Investment Group. In delivering the keynote speech at the 2013 Avalon Invest Caribbean Now forum in New York City on Wednesday, June 5th, Loewenstein said “the government that can lure the most investment will be the long term winner because these investments will spur the local economy.”

He said the Caribbean is a safer bet for investors compared to Africa and Latin America since growth in the LATAM has much more political risk than the Caribbean while investments in Africa is “still too early stage with unstable governments that cause the potential for tremendous risk.”

“Investments now will be on the ground level of a growth and a building boom that will spur more growth in the future,” predicted Lowenstein, adding that the time to buy is when valuations are cheap.

But he said governments must do their part to attract the baby boomers and new millionaires and billionaires who are growing globally including in China and Russia.

“These people are accustomed to the modern conveniences of society,” said Loewenstein, so to entice them to come, all the technology needs to be in place, the marina has to be built, the service industry has to be trained and all the comforts of home need to be transported and this requires significant investment.”

For the full speech from Mr. Loewenstein log on here or to http://investcaribbeannow.com/presentations/

Meanwhile, Royal Caribbean International copped the prestigious “ICN Corporate Leadership Award” for 2013 for it’s over $200,000,000 investments in the Caribbean region in the past 10 years.

Invest Caribbean Now is the brain child of Felicia Persaud and is now in its third year.