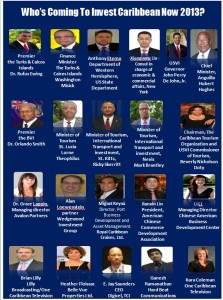 CaribPR Wire, NEW YORK, NY, Fri. May 24, 2013: The countdown is on to the Avalon Invest Caribbean Now forum, the definitive Caribbean investment meeting and the most promoted item on the Caribbean Week calendar, set for June 5th from 7:30 to 11:30 a.m. at the Radisson Martinique, 49 West 32nd Street at Broadway in New York City.

With over 1,000 media placements already including on the Wall Street Journal, CNBC, Bloomberg and Reuters, the conference remains true to its goal of matching international financial influencers with government officials and policy makers from “Paradise,” the last emerging market on earth.

Speakers and panelists confirmed for ICN 2013 are:

Xiaoguang Liu, consul in charge of economic & commercial affairs of the Consulate General of China in New York

Government attendees will include:

A VIP only reception for sponsors, speakers, panelists and special guests will precede the forum on June 4th at the Yale Club and will be sponsored by The Turks & Caicos Islands Investment Agency.

Tickets at US$185 are available only through May 24th for the June 5th forum at http://investcaribbeannow.com/registration/

The coveted 2013 ICN Leadership Award will be presented to Royal Caribbean International.