Archive for the ‘Climate Change’ Category

The donation will be instrumental in helping Nature Seekers protect the ancient, endangered leatherback turtles nesting in Trinidad

MATURA, Trinidad and Tobago and MONTREAL, Sept. 12, 2022 /PRNewswire-HISPANIC PR WIRE/ – Age of Union Alliance, led by tech leader and environmental activist Dax Dasilva, is proud to announce a USD $1.5 million donation to Nature Seekers, a non-profit community-based organization in the village of Matura, on the east coast of Trinidad, with a focus on the conservation and protection of sea turtles. This will be the single largest private donation in Nature Seekers’ history. Age of Union’s support will be instrumental in the protection of endangered leatherback turtles whose nesting grounds on Matura Beach are in more danger than ever before due to climate change and pollution. 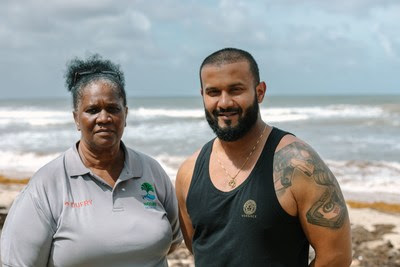 Matura Beach is one of the last remaining major turtle nesting sites in the world for leatherback turtles, which have existed for over 100 million years, dating back to the age of dinosaurs. These massive creatures, as long as 2.2 metres, are the largest sea turtle species in the world and also one of the most migratory, crossing the Atlantic Ocean. New GPS technology has allowed scientists to track their journeys, and many have migrated to Canada’s Atlantic coasts in recent years where they feed on the abundant jellyfish every summer and fall.

The population of these turtles has declined drastically in the last century as a result of intense egg collection, poaching, fishery bycatch, habitat loss, climate change, and much more. They are listed as Vulnerable on International Union for Conservation of Nature’s red list of Threatened Species. Nature Seekers, who have been working to conserve these turtles for over 30 years, were in desperate need of help after beach closures during the pandemic nearly eradicated their historical revenue sources.

This marks the ninth conservation project Age of Union has announced in less than one year following Dax Dasilva’s initial pledge of $40 million. Today’s announcement also aligns with Age of Union’s global premiere of its short documentary film CAUGHT in Toronto on the evening of September 12. In partnership with Sea Shepherd, this film reveals the shocking consequences of industrial fishing and excess consumerism, depleting oceanic ecosystems, with a specific lens on dolphin bycatch off the coast of France.

“When I first met Suzan Baptiste, Managing Director at Nature Seekers, I was incredibly inspired by her determination and perseverance to help shift this coastal community in Trinidad from turtle poaching to turtle conservation. We hope with Age of Union’s help, Nature Seekers will now be better equipped to protect these beautiful, endangered turtles who, through their incredible migration journeys, also have connections to Canada.” - Dax Dasilva, Founder of Age of Union.

“We couldn’t be more thankful for this generous gift from Age of Union. Leatherback turtles are recognized as a keystone species, and their demise could have global consequences on our oceans and their ecosystems. Now, with the help of Age of Union, these turtles have an amazing chance for survival.” - Suzan Baptiste, Managing Director of Nature Seekers

“The Government and people of Trinidad and Tobago sincerely appreciate the support from Age of Union for their conservation initiatives in the country. We commit to working with Dax Dasilva and his team, exploring opportunities for broader collaboration in the environmental and technology sectors and beyond.” - Senator Dr. Amery Browne, Minister of Foreign and CARICOM Affairs of Trinidad and Tobago

“Age of Union’s conservation project for leatherback turtles is an excellent example of Canada Trinbagonian cooperation on environmental conservation.” - Kumar Gupta, High Commissioner of Canada to Trinidad and Tobago

About Age of Union Alliance

Age of Union is a non-profit environmental alliance that supports and makes visible a global community of changemakers working on the ground to protect the planet’s threatened species and ecosystems. Launched in October 2021 by tech leader and environmental activist Dax Dasilva in Montreal, Canada with an initial $40 million pledge, Age of Union seeks to ignite a flame within every person through conservation efforts that solve critical environmental challenges around the world and inspire high-impact change by showing the positive impact that every individual can make.

Nature Seekers is a non-profit community-based organization founded in 1990 and situated in the village of Matura, on the east coast of Trinidad in the south Caribbean. Its primary focus is the conservation and protection of the sea turtles that nest in the region, including the Leatherback turtle. Over a 30+ year period, Nature Seekers helped to shift this coastal community from turtle poaching to turtle conservation.

CaribPR Wire, NEW YORK, NY, Mon. May 31, 2021: A slew of leading Caribbean celebrities have adopted the new title of “Disaster Fighters” ahead of the 2021 Atlantic Hurricane Season, which climate scientists forecast will be above normal.

The creative campaign to fighting disasters this season, kicks off today, May 31, 2021, one day ahead of the start of the hurricane season, and aims at reiterating the importance of Caribbean nationals to be prepared, especially in the midst of the COVID-19 pandemic.

The new CDEMA ground-breaking initiative, supported by the Africa Caribbean Pacific – European Union Natural Disaster Risk Reduction (ACP-EU NDRR) Program, the Canada Caribbean Resilience Facility, the Global Facility for Disaster Reduction and Recovery (managed by the World Bank), and Binance Charity, aims at increasing community preparedness and resilience to risks, such as hurricanes, volcanoes, COVID-19, and other natural hazards affecting the Caribbean region, through a catchy disaster prevention song and music video that will be promoted on social media.

The month-long campaign that coincides with the beginning of the annual hurricane season and will feature important preparedness messages alongside the campaign song and music video on Tik Tok, Facebook, Instagram and Twitter, as well as the campaign’s website, disaster-fighters.org.

In an unprecedented move for the campaign, CDEMA will implement its first-ever Non-Fungible Tokens (NFTs) marketplace to raise donations and support disaster preparedness and disasters in the region. Participating musicians, cricketers and other celebrities will donate signed balls, t-shirts and various memorabilia including exclusive, limited-edition collectibles, that will be auctioned to the public as part of the initiative’s fundraising efforts. Items will include unique, personalized messages from the “Disaster Fighters” celebrity team.

Fans and the public are encouraged to show their support for the initiative by purchasing collectibles signed by their favorite celebrities to assist CDEMA in the important and meaningful work it does.

“Many Caribbean countries have been battling the compound impacts of drought, COVID-19, volcanic eruptions and now hurricane season,” said Elizabeth Riley, Executive Director (ag), CDEMA. “We wanted to use an innovative, inclusive approach to ensure that communities are empowered with the necessary plans, information and tools to tackle the disaster impacts that we as a region have been facing.”

Tahseen Sayed, World Bank Country Director for the Caribbean, added: “The past year has been very challenging for the Caribbean. Although much of the region has managed the health effects of the pandemic through early actions, the socioeconomic impacts have been severe. It is more important than ever this year for Caribbean countries and people to be well-prepared for the hurricane season. We are pleased to support this innovative new campaign from CDEMA that aims to help communities protect themselves and their livelihoods.”

Lamothe Advocates for “Climate-Smart Zones” in the Caribbean

MIAMI, Sept. 27, 2019 /PRNewswire/ — This week at the United Nations Climate Action Summit, Former Prime Minister of Haiti, Laurent Lamothe, stressed the importance of “Climate-Smart Zones” to mitigate the impact of natural disasters.  Speaking at the Smart Climate Day event hosted by the Monaco Better World Forum (MBWF), Mr Lamothe spoke about how climate change multiplies the power of cyclones and hurricanes. Island states and territories in the Caribbean are extremely vulnerable to extreme weather conditions.

“Haiti is a poster-child for natural disasters and I have experienced first-hand the devastation. Every year the Caribbean braces itself for hurricane season. As a region we need mitigation strategies that better prepare our countries for natural disasters. Large shares of the region’s population live in high-risk areas with weak infrastructure.  Economies rely heavily on sectors sensitive to weather, such as tourism and agriculture, while capacity and resources to manage risk are limited.”

It is for this reason that politicians and philanthropists from the Caribbean established the world’s first “Climate-Smart Zone” and Accelerator. The Accelerator has created an unprecedented coalition including 26 countries and over 40 private and public sector partners which will implement climate solutions for resilience, renewable energy, development of sustainable cities, oceans and transportation. This climate-smart zone will not only protect the region but create jobs and a new economy in climate-smart infrastructure.

The Caribbean Climate-Smart Accelerator was formed in 2017 to strengthen the region’s readiness and response to disasters. Its objective is to help transform the Caribbean economy through fast-tracking sound public and private investment opportunities that support climate action. Building more resilient countries, cities, and industries through partnerships across the public and private sectors, with the goal of creating the world’s first climate-smart zone.