ROSEAU, Dominica, Aug. 19, 2022 /PRNewswire-HISPANIC PR WIRE/ — Dominica’s Minister for Tourism, International Transport and Maritime Initiatives, Hon. Denise Charles, announced two new artistes to perform at Dominica’s World Creole Music Festival carded for October 28 – 30, 2022 at the Windsor Park Sports Stadium.  Grammy award winning Nigerian afrobeat sensation Burna Boy will be the headliner on the festival stage to crone his popular melodies such as “Last, Last” with his unique fusion of dancehall, reggae, afrobeat and pop music. Burna Boy recently released his sixth studio album Love, Damini which debuted at #14 on the Billboard Top 200 and continues to rank high on Apple Music in 47 countries.  Joining Burna Boy on stage will be rising Nigerian musical star Omah Lay with his catchy afrobeat tunes such as “Lo Lo”, “You” and “Do Not Disturb.”

The announcement came one week after the official launch of 21 artistes slated to perform at the World Creole Music Festival’s 22nd edition.  Minister Charles extended an invitation to visitors to “come to Dominica to have a cultural immersion, second to none for the entire month and for the week leading to the festival.”

Nightly tickets cost EC$150/ US$58 and season tickets cost EC$375/ US$144. The current special rate for Party VIP is EC$960/ US$369 season pass or EC$350/ US$135 nightly while stocks last. Village VIP tickets at the special rate are currently sold out but will be released at the new rate soon. Tickets can be purchased online at https://dominicafestivals.com/wcmf-home/ or at the box office.

CaribPRWire, Toronto, Canada, Thurs. Nov. 11, 2021: Casting is underway for In the Black and popular American actor Richard Gant has been attached to the project to play the role of Jamaican-born Harry Gairey. Produced by CaribbeanTales Media Group and directed by Caribbean-Canadian Frances-Anne Solomon, the feature film is an adaptation of entrepreneur and activist Jamaican-Canadian Denham Jolly’s memoir of the same name.

In the newly re-imagined The Wonder Years (ABC), Gant guest stars as Granddaddy Clisby – the latest role for the 77-year-old actor who also plays grumpy Walter on CBS’s The Neighborhood. The veteran actor is known for his roles on Greenleaf (Percy Lee), The Mindy Project (Melville Fuller), Men of a Certain Age (Owen Thoreau, Sr.), General Hospital and NYPD Blue.

“I met Richard last year in Los Angeles at the premiere of Hero at the Director’s Guild of America Theater,” recalls Solomon. “So, when I was thinking about who would be the perfect actor to play the role of the legendary Harry Gairey, a Jamaican-born community leader and activist who worked as a railroad porter, Richard’s commanding presence and booming voice instantly came to mind. He will be phenomenal!”

In the Black focuses on Jolly’s journey from Jamaica to Canada, the enormous influence Jamaican political activist Marcus Garvey had on his life as well as Jolly’s fight to secure a license for a Black-owned Toronto radio station, Flow 93.5.

Fusion Heats Up with The 2021 Summer Series On-Location

CaribPR Wire, NEW YORK, NY, Weds. June 9th, 2021: Synergy TV’s top-rated entertainment talk show Fusion hosted by DJ D-Life is the hottest culture show in the Caribbean and U.S jampacked with celebrity interviews, newsmakers and ordinary people with extraordinary talents. “This summer, we are taking it on the road,” says an excited DLife, who is also the Executive Producer. “We are kicking things off with the cast of Auntie Jillian – The Danfords – and my viewers will meet them first on Friday June 18th at 8pm – and then on a live show hosted by me following the premier on Sunday June 20th at 8pm. This is big!”

This summer’s Fusion guestlist includes Nigerian superstar Burner Boy, South African musician Master KG and Nigerian singer-songwriter Tekno. Fusion will tape live on the famous Valevibe Breakfast Yacht in New York on July 3rd – with all proceeds going toward COVID relief in Trinidad. Throughout the summer, there will be Fusion brand give-aways and a chance to win VIP upgrades to the 2021 Miami Carnival.

“DLife’s energy keeps our viewers tuning in week after week,” exclaimed O’Brian Haynes, General Manager of Synergy TV. “You never know what’s going to happen. Or who he will have on – from big name artists to people who are just doing remarkable. That’s what Fusion is about.”

“I’m the Features Editor at the Trinidad Express. I’ve also been an Entertainment Specialist for the past 27 years,” said Wayne Bowman “Just want to say, very good work on Fusion. Keep it up.”

Synergy TV is one of the most popular television brands across the Caribbean. Available from South America to the U.S, it has a total market reach of 6.47 million people and transmits from: Air Link, DIGICEL, Direct TV and is available through the TEGO TV APP. For more than three decades, Synergy TV continues to be the channel of choice for Caribbean content.

CaribPR Wire, TORONTO, Canada, Thurs. Feb. 27, 2020: Following a sold-out Opening Night of the 28th Pan African Film and Arts Festival (PAFF), with more than 1,000 patrons at the Director’s Guild of America in West Hollywood,  and two subsequent packed screenings, Frances-Anne Solomon’s HERO was awarded the newly created Ja’Net Feature Narrative Award, renamed in honour of PAFF co-founder, Ja’Net Dubois.  The well-loved actress and songwriter, who sadly passed away unexpectedly  during this year’s  festival, was best known for her role as Willona in the TV series, Good Times.

“We are proud to be the recipient of this inaugural award in honour of Ja’Net. Hero is a film about a Pan African trailblazer and it  resonated deeply with audiences at  this festival,” says Frances-Anne Solomon, who wrote, produced and directed the film. “It spoke to the heart of what PAFF  is about, and connected the dots for many people who lived this history and were not aware of the pivotal role that many Caribbean professionals like Ulric Cross played in the Pan-African Liberation movements.” 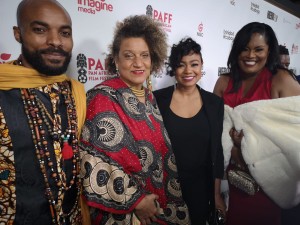 PAFF is the largest Black film festival in the United States and the largest Black History Month cultural event in the nation. It ran from February 11th to February 23rd. A record-breaking 225 films were selected for screening, representing 52 countries in 26 languages – that is, 86 feature films; 128 short films and 11 new media selection. Plus, ArtFest featured more than 100 fine artists from around the world. The Academy of Motion Picture Arts and Sciences (AMPAS) has designated PAFF as an official qualifying film festival for live action and animation short films.

HERO is inspired by the extraordinary life and times of Trinidad and Tobago citizen, diplomat and judge Ulric Cross, the most decorated West Indian of World War II. He was a member of the highly decorated group of Caribbean pilots who flew combat missions for the United Kingdom’s Royal Air Force (RAF) in World War II. After his service, Cross went on to play an active and important role in the Pan African Movement, which led to the Civil Rights movement in the United States, and the creation of the 28 modern Caribbean and 54 modern African nations.

A trailblazer in the film and television industry , Frances-Anne Solomon is an  award-winning filmmaker, writer, producer, curator and  entrepreneur. She is a  2019 Director member of the Academy of Motion Picture Arts and Sciences. HERO is her third feature film and has received critical acclaim on its worldwide tour, that has included a theatrical run in the U.K. Following a successful career as a TV Drama Producer and Executive Producer with the BBC in England, Solomon launched the CaribbeanTales Media Group in Canada and Barbados that includes an international film festival and distribution company. Full bio: www.francesannesolomon.com

California Pictures was originally founded in 1944 by Howard Hughes and Academy Award winner Preston Sturges and reincorporated in 2008 by Steven Istock.  The company is focused on creating great movies and television content with dynamic characters, strong and personally identifiable themes and powerful journeys for a worldwide audience. California Pictures is an international production and distribution company, exhibiting and selling independent films across the world.  They produce and sell films at the Cannes, American, Berlin and Hong Kong film markets and represent a diverse group of filmmakers and projects from around the world including England, China, India, Jamaica, Mongolia, Canada, Denmark, Australia, South Africa, Scotland, Nigeria, Russia, Barbados, Columbia and Cambodia.