CARIBPR WIRE, Basseterre, St. Kitts, Dec. 12, 2022: Prime Minister Terrance Drew of the island nation of St Kitts and Nevis was in Dubai recently for a state visit that not only aims to strengthen bilateral relations but also glean lessons from the United Arab Emirates that will pivot the island into a sought-after business and leisure hub in the Caribbean.

The new prime minister and his delegation had several meetings and engagements over the four-day trip which took place from 29 November to 3 December 2022.

The two regions have enjoyed years of fruitful relations that have resulted in several areas of cooperation in which both countries have achieved together. This includes the signing of a historic Air Services Agreement. The seminal move paved the way for air traffic between the Federation of St Kitts and Nevis and the UAE.

Just as recently as the 1960s, Dubai’s economy was merely dependent on the revenues generated from trade and oil exploration concessions. A major chunk of revenue obtained from oil reserves started to flow in 1969 and the rapid development of Dubai began – including major infrastructure like schools and hos­pitals and, over the years, it trans­formed Dubai into the business hub we know today.

St Kitts and Nevis developed and instituted its citizenship by investment programme in 1984 as a way to increase and diversify revenue generation. For nearly 40 years the programme has been instrumental in catapulting the nation from just a small island in the Caribbean to a globally recognized investment destination.

Without this foreign direct investment into the nation, St Kitts and Nevis would have certainly progressed at a much slower pace than desired.

The government of St Kitts and Nevis has made considerable progress in reducing its public debt and is among other countries in the Caribbean that supplement their economic activity through CBI programmes which provide astute investors with the option to obtain citizenship by investing in the country. The new government administration of St Kitts and Nevis believes that residents of the United Arab Emirates (UAE) have a lot to benefit from its CBI programme.

The country is looking to build its reputation on the international stage and the CBI programme is one way to direct foreign direct investment to innovative projects across the spheres of education, health, agriculture and tourism.

For example, the travel and tourism sector accounted for one tenth of the gross domestic product (GPD) in St Kitts and Nevis in 2021, dropping for the second consecutive year. Part of the funds channeled the citizenship by investment programme will be used to revitalize the sector and re-establish St Kitts and Nevis as must-visit destination.

Attracting the right kind of developers who will inject cash into developing attractive real estate projects that will charm discerning investors, is one way to grow the tourism sector. Not only that but the upgrading and development of important infrastructure such as schools, hospitals, airports and hotel chains is another way the funds will be used to not only bring up tourist numbers but investors too.

The visit was also aimed at deepening relationships with important stakeholders including international investors and government approved agents, who play a vital role in promoting and supporting the country’s recently upgraded citizenship by investment programme.

St Kitts and Nevis is the first country of the Caribbean Community to establish a formal diplomatic presence in the UAE, recently opening an embassy and consulate in the region.

The members of the delegation which included, Cabinet Secretary, Dr Natta, Attorney General, Mr. Wilkin, Minister of Tourism, Ms. Henderson, Mr. Anthony and Ms. Galloway, were positive following the visit and believe that there were many lessons learned from visit that they could take back home and implement.

The visit also signifies to the world St Kitts and Nevis is open for business. During the visit, business partners, investors and citizens were able to meet the Prime Minister and the accompanying delegation members at an exclusive cocktail event that was hosted by the High Commission of St Kitts and Nevis during the trip.

The visit provided an opportunity for St Kitts and Nevis to attract investors who seek mutually beneficial partnerships with the nation.

Saint Kitts and Nevis administers one of the most successful citizenship by investment programmes in the world. This government delegation was aimed at showing investors, entrepreneurs and families from the UAE that they are all welcome in Saint Kitts and Nevis.

The Prime Minister’s visit has come at a time when the economies of many countries are affected by the lingering impact of the COVID-19 pandemic and by the consequences of the Ukraine-Russia conflict.

Prime Minister Drew is on a drive to find and implement solutions that will prosper St Kitts and Nevis and one of those actions included upgrading the country’s CBI programme – the government is taking measures to sustain and enhance the image of the twin-island federation’s CBI programme, so it is more transparent and follows the principles of integrity and good governance.

The St Kitts and Nevis government also recently launched its “Venture Deeper” campaign. This is a branding campaign aimed at highlighting the country’s famous and marked natural environment while introducing elements of introspective self-discovery and intention.

St Kitts and Nevis’ revamped citizenship by investment programme is aimed at intelligent investors looking not only to prosper themselves, but those who are sustainability minded in their investment decisions. 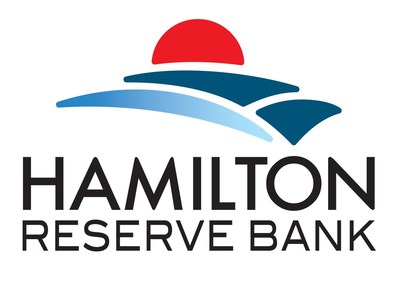 Hamilton Reserve Bank is the largest global bank in the region with worldwide offices and customers. The Bank’s rebranding reflects its global presence, “fortress” balance sheet, and rapidly expanding customer base from more than 150 countries. The Bank’s operations, compliance, control, and SWIFT code NIBTKNNE remain the same. 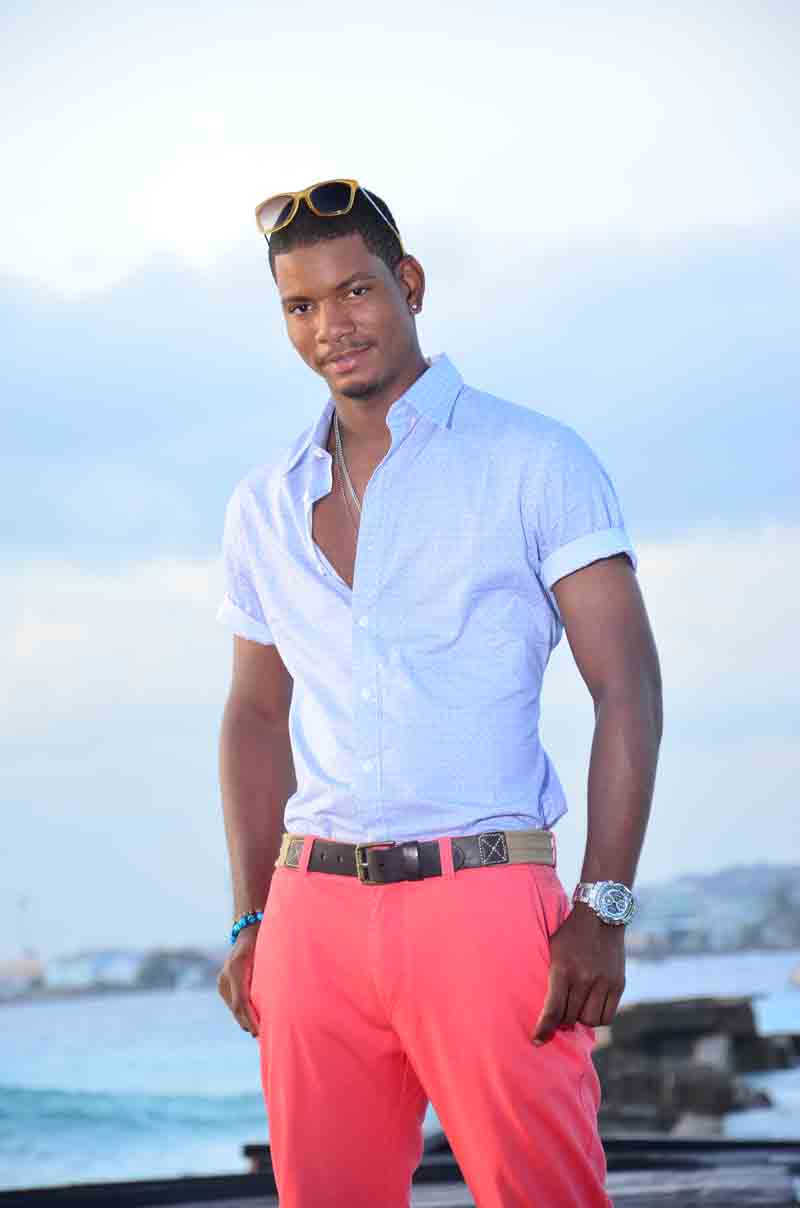 Powell, the dashing cricketer recently described in global media reports as “enigmatic,” will partner with a prominent UK-based group of companies, who are set to develop Pinneys.

The deal comes on the heels of a successful ad campaign featuring Powell and a leading national Bank, which is set to air later this month, with the charismatic player also recently re-signing a two year deal with his long-term sponsor, Indian cricketing gear giant, Sareen Sports.

The gifted left-handed batsman, a former student of the exclusive Millfield school in England, is a star undeniably on the rise.

He has even stirred interest from Bollywood film producers out in India, owing to his model good-looks and eloquent mannerisms.

This, despite an unfortunate blow, that resulted in surgery to the finger of the stylish 23-year-old left-handed batsman two weeks ago, following an injury acquired during a regional match in early April, which has left him out of contention for the 2013 West Indies Champions Trophy squad that will compete in England next month, much to his disappointment.

Powell, however, says he is determined to get back to blistering form quickly and is concentrating hard on becoming fully fit in time for the West Indies’ forthcoming Tri-Nation Tournament against India and Sri Lanka, in late June.

One of the most successful cricketers to emerge out of his native island of Nevis, he made his Test debut against India in 2011 and scored two centuries in a single match during the Test series against Bangladesh in November of last year to become only the first West Indian player since Brian Lara, and the ninth West Indian player in history, to achieve the feat.

Powell has displayed elegance, confidence and maturity beyond his years, which saw him kick off his recent tour of Australia with a sensational knock of 83 (his highest ODI score to-date) during the West Indies v Australia ODI series, in February this year.

But it’s not all about chasing runs and bearing the fruits of his on-field success for this exciting young cricketer. Kieran Powell is also both eager and willing to give back to the game, to his fans, and to the community.

Following the ODI match against Australia at the Sydney Cricket Ground, (SCG), during the same tour, Powell took time out to meet and greet cricket fan Callum, (pictured), an 11-year-old patient from Sydney Children’s Hospital in Randwick. The personal invitation from the international star and his Manager for Callum to attend the SCG game was an inspiring experience for the youngster, who is in remission from cancer and had just been through hip replacement surgery. 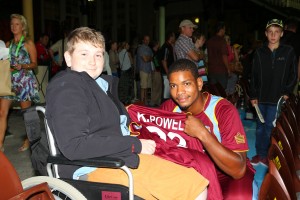 Powell also recently arranged for a cheque to be presented to the family of former West Indies cricketer and his Leeward Islands teammate, Runako Morton, who was tragically killed in a car crash in 2012.

Despite the buzz surrounding his incredible ability, the end-focus has remained firmly unchanged for the popular batsman. As the world watches in anticipation, the next steps of an exceptionally talented international cricketer, Kieran Powell remains humble, focused, committed and diligent about perfecting his craft and his first love; playing cricket and representing the West Indies.

SAINT JOHN PARISH, Nevis, Oct. 2, 2012 /PRNewswire/ – Cancer Cleared Clinics, a Nevis LLC, announced today that it is waiting for approval to operate it’s Breast Cancer Clinics in thirty countries. Cancer Cleared Clinics has a unique and tested combination of therapies that are more effective and less harmful to the body than the current methods of cancer treatment used in the United States. This treatment is not available in the United States.

Eugene Steele, cancer historian, said, “I have a personal war against cancer and those that prevent better treatments. The Standard American Diet is the major cause for the two largest killers: heart disease and cancer. Every person has cancer created in their bodies everyday. Our bodies are equipped with an immune system which attacks and destroys these cancer cells. When we eat a Standard American Diet we weaken the immune system and it cannot destroy the cancer cells. This can all be reversed and has been available for over 100 years.”

The Cancer Cleared Clinics’ method is to remove the protection the breast cancer cells have, and let the body destroy these cancer cells in seven days. Cancer Cleared Clinics offers a money back guarantee and a fixed fee of $3500. No other clinics in the world will make this offer. “There have been many developers of cancer therapies that have been blocked or ignored,” stated Mr. Steele. “The United States lags behind many other countries in delivery of ground-breaking advances in quality medical care.”

Steele adds, “There are more effective treatments for cancer, but because of the politics and restrictive laws in the United States, doctors can only make quiet suggestions to their patients because these doctors do not want to incur the wrath of the FDA and the medical establishment, and jeopardize their license to practice medicine.”

Cancer Cleared Clinics is in the last phase of financing. Each Clinic costs $200,000 to establish. They have a new concept of cancer medical tourism. Each clinic will be located in a resort making the treatment a vacation. The treatment only requires 45 minutes a day for seven consecutive days. The rest of the day the client is free to enjoy their vacation with their family. There is no chemotherapy, surgery or radiation.